August 26, 2017
In Elixir, functions are first class citizens. What does it mean? It means that functions can be
Anonymous functions has no name and no modules. We can create them with syntax fn ->

In order to invoke this function we must use the .() syntax

Named function can take anonymous functions as argument. This helps promote decoupling. A sample example is shown below

The expected value for sum and product will be 7 and 10 respectively. With this example we can conclude that anonymous functions can be passed as arguments to other functions just like any other data type.

The & operator is used to create helper functions in a short and concise way. Our addition function as mentioned in above examples can be re-written as below

This version of anonymous function is often found used inline as arguments to other functions. One example would be Enum.map function which is part of Elixir's standard library. It returns a list where each item is the result og invoking a function on each corresponding item of enumerable

Popular posts from this blog 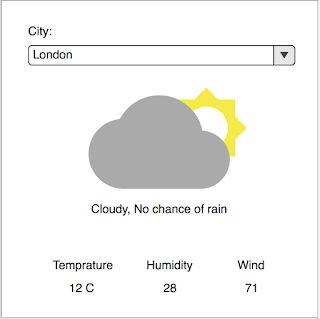 An extension is a zipped bundle of files (HTML, CSS, Javascript, images etc). It allows us to add functionality to chrome without deeply diving into native code. They can interact with servers through XMLHttpRequest (ajax) and if we wish to read (or modify) HTML from existing web page then content script allows us to do so. Google has already done a great job with documentation and you can find a "Getting Started" guide here . Let's Start We are going to develop a simple extension which will show us the weather for selected city. We will be developing a single page application using ReactJS which will target weather API using XMLHttpRequest and then with help of plain old javascript we will process the JSON response to update UI. You can find source code of this application on Github under " app " folder. Packaging From the "app" folder you can extract the code for our single page application. This is the core of application
Read more

June 01, 2015
Initial project setup and unit test cases using Mocha and Chai A TODO Application We will be writing a sample TODO app which helps our users to remember important tasks. During the process of development we will go through various concepts of AngularJS and how it can be used with RequireJS for dependency management and lazy loading of javascript files. To keep our code in best possible quality, we will be relying on unit cases (and plenty of it) using Mocha and Chai which will run on Karma Iteration 1 - Setup: To start with any angular js application we need to create a HTML page with all the css and javascript depenendencies defined. We will include below dependencies on our HTML 1.   Bootstap CSS 2.  Angular JS 3.  Require JS Our end result should look like below: <html> <head> <meta charset="utf-8"> <meta http-equiv="X-UA-Compatible" content="IE=edge"> <meta name="viewport"
Read more